Genie lamp, Smoke genie robot (inside lamp)
Aladdin's Lamp or Arabic Lamp (アラビンのランプ) is a gadget that resembles the Arabic-style antique oil-lamp. It summons a smoke-like robot genie that will grant any of his master's wishes. The lamp can be used as many time as possible, but it is not magical.

The Aladdin's Lamp summons the smoke genie that will grant his master any wishes they want. Although they are incredibly obedient and "resourceful", the genie's method of granting his master's wishes are radical, and not magical at all. For example, when Nobita asked the genie to finish up his homeworks, the genie went to see Sensei, and forced him to do the homework, as the genie doesn't know how to. The genie will return to his lamp after one wish "has been granted".

For serious wishes such of finding one million yen, the genie will threatens everyone in order to grant the user's "serious wishes".

In the 1979 anime
Add a photo to this gallery 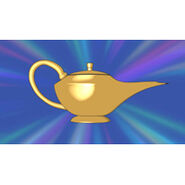 In the 2005 anime
Add a photo to this gallery

Arabic Lamp in expo.
Add a photo to this gallery

Retrieved from "https://doraemon.fandom.com/wiki/Aladdin%27s_Lamp?oldid=116173"
Community content is available under CC-BY-SA unless otherwise noted.