To activate it, the user must first push the button on the Copy Robot and it will transform into the user it was being held in. The robot will have the same look and personality as the user and only difference between the robot and the user is the robot's reddish (or sometimes pinkish) nose. However, if the robot gets it's nose hurt, it's personality will change into a different one (a kind robot will become mean if it gets its head hurt). To deactivate it, the user must push the button on the robot's nose.

References/Cameos in Doraemon and other media 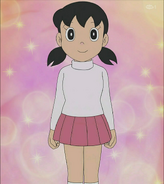 Retrieved from "https://doraemon.fandom.com/wiki/Copy_Robot?oldid=122027"
Community content is available under CC-BY-SA unless otherwise noted.