Dora-rinho (ドラリーニョ Dora Rīnyo) is one of the holders of Bestfriend Telecard and a genius soccer athlete. His lack of facial expression, somehow makes him looked simple-minded. Though that seems to be the case; his keen instinct has saved his friends numerously from perilous situations.

Thanks to his personality; he uplifts the atmosphere which frequently turned intense, especially when pressured by the enemies. He serves as the mood-maker of The Doraemons.

Dora-rinho is the only other member of the Doraemons (other than Doraemon, sometimes Dora Med III, and El Matadora), who uses the fourth-dimensional pocket.

Dora-rinho is happy-go-lucky and bubbly. He just doesn't care about impending dangers, nor knowing the word "calm down". His naïveté makes him an easy target to his enemies' tricks.

An eccentric individual charged full with energy, which explains his habit of carrying out his tasks in haste; though it frequently ends up just like they said: "Haste makes waste".

He loves it with plenty of Tabasco.

Dora-rinho is the ace striker in his team. He possesses incredible ball handling, which enables him to dribble like a flow of water.

His signature technique is his well-known overhead. The acceleration is so strong, that he once was able to score a goal; from the other side of the field.

Dora-rinho is extremely forgetful. He mysteriously forgets everything that just happened, usually when he walks three steps from his original position.

It's also implied that he has a fear of occult-related subjects.

Dora-rinho is joined in an unnamed football club, along with his best friend Nobinho (ノビーニョ Nobīnyo); where he serves as an ace Forward and Coach simultaneously.

He seems to be the only member The Doraemons that owns, and carries 11 identical Mini-Doras along with him.

He formed the closest bond with Dora-rinho, especially as his babysitter.

His minions and friends. Always seen with Dora-rinho. 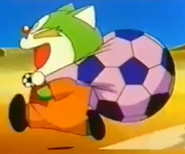