Able to transform into a giant when angry

Dora-med the Third (ドラメッドⅢ世 Dora-meddo Sansei), abbreviated as Dora-med III, is a member of The Doraemons and one of the holders of Bestfriend Telecard. He and the other Doraemons were Doraemon's classmates before graduating from the Robot School. Dora Med can use magic, and like Aladdin, he has a magic lamp and a magic carpet. His only fear seems to be water, but he has a dream of getting over his aquaphobia in order to build a water park called "Water Land", for the people who live in the desert region. He can predict the future using tarot cards, and when he gets into a rage, his size multiplies into tens, turning him into a powerful giant. He can change back when he calms down or when he realizes he's stepping in water.

Dora Med is very short tempered and easily angry and because of this, he turns into a giant when he is annoyed. Despite having aquaphobia, he loves to freeze his dorayaki and his favorite thing to do is to ride on a magic carpet when he has time.

Because of his aquaphobia, he loves his dorayaki to be freeze-dried.

Dora Med is proficient in fortune-telling, especially by the means of Tarot Cards. He can freeze anything as he freezes his dorayaki.

Although he was a resident of a desert region; ironically, he develops a fear of water.

He also hates tornados too.

He lives in the royal palace of a Saudi Prince; where he works as an oracle for his master and Saudi Prince, Arashin. However, his home is in Baghdad, Iraq. He has a twin brother named Sindora-bad.

Initially, Dora Med thought of Dorapin as an evil thief. However, he later comes to realize that Dorapin isn't what he thought he was after all when he saw him protect his best friend, Mimimi. He comes to admire Dorapin for what he does and even trusts him. 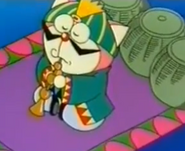 Retrieved from "https://doraemon.fandom.com/wiki/Dora_Med_III?oldid=124887"
Community content is available under CC-BY-SA unless otherwise noted.