January 23, 2020 (originally, but was postponed and the movie was put on CHILI streaming service instead)

Doraemon: Nobita's Chronicle of the Moon Exploration (ドラえもん のび太の月面探査記, Doraemon: Nobita no Getsumen Tansaki) is the 39th installment of the Doraemon feature films. The franchise's 39th film was released in Japan on March 1, 2019. THE GIFT was used as the ending theme song for the movie.

After Nobita's class laughs at him for believing in the moon rabbit, Doraemon gives him the “Different Opinion Club Members Badge” to make his theory come true. With Doraemon's gadget, they create a civilization of rabbits on the moon and name it the Rabbit Kingdom. Nobita meets a mysterious transfer student named Luca Tsukino, who joins the Different Opinion Club. Meanwhile, Emperor Diabolo, and his subordinate, Goddart search for the mythical Espals who are prophesied to save the doomed Planet Kaguya.

A moon rover, that was exploring in the moon. caught what so-called "Mysterious White Shadow". Curious about what that is, Earth Scientist directed the rover to move towards the Shadow, but then the connection interrupted by some force. The onboard cameras stopped working

The incident made deadline on State television in Japan at least. Nobita, after he fell down the stairs, watched the movie. He was amazed by it. After watching a breaking news report on "a mysterious white shadow" that appeared on the moon, Nobita is convinced that it is the mythical "Moon Rabbit." After Nobita's class laughs at him for believing in the moon rabbit, Doraemon gives him the “Different Opinion Club Members Badge” to make his theory come true. Using the badge, Doraemon and Nobita travel to the moon and create a civilization of moon rabbits which they name "Moobits."

Meanwhile, an Emperor known as Diabolo and his subordinate, Goddart discuss the whereabouts of a group of people known as the Espals, beings with mysterious powers. The Espals have a prophecy to fulfill. According to legend, the Espals will save Planet Kaguya. Commander Goddart, and the lower ranking Cancer and Crab, set out to search for the Espals.

Later at school, Nobita meets a new transfer student named Luca Tsukino, who, alongside Gian, Shizuka, and Suneo, becomes a member of the Different Opinion Club. The group travels to the now developed Rabbit Kingdom, where they enjoy Omochi (rice cake) cusine prepared by the Moobits, and meet Nobit, a Moobit who bears a resemblance to Nobita. After Nobita gets lost, he discovers Luca's true identity: Luca and his siblings are Espals, who live in a colony deep within the moon. There, Doraemon, Nobita and the group meets Luca's older sister, Luna, their 7 siblings, and Mozo, a moon turtle who hides inside Luca's sleeve.

Luca and Luna reveal the history of Planet Kaguya and the Espals to Nobita and the gang.

Long story short, The gang decided to play a simple race on the surface of the moon. They raced before eventually got caught by Emperor Diabolo's forces. The Gang managed to escape to their homeland (Earth). And Luca, Luna, and etc. got arrested

Nobita and the gang, then planned another visit to the moon, after Luca, Luna and their family got arrested by the forces of Emperor Diabolo. They planned to save them. Nobita, Shizuka, Suneo, and Gian was preparing their needs, packing clothes, and bringing snacks.

They left as soon as everything was ready.

Soon as they landed on the surface of the moon, they were met by the Rabbit Nobita. They thought, that it might have something to say to them. turns out The Nobita Rabbit had saved Luna from the Diabolo forces.

Doraemon, Nobita, Suneo, and Gian had planned to save Luca, using the ship warp drive capability. While Shizuka, was taking care of Luna back on the moon.

Esper Hat
Add a photo to this gallery 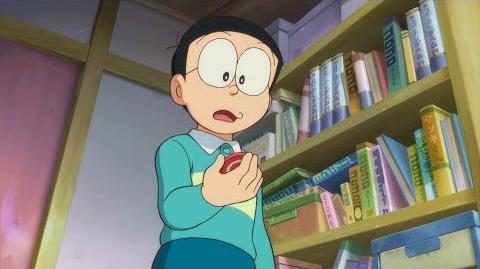 Retrieved from "https://doraemon.fandom.com/wiki/Doraemon:_Nobita%27s_Chronicle_of_the_Moon_Exploration?oldid=123785"
Community content is available under CC-BY-SA unless otherwise noted.