Doraemon The Movie: Nobita's Great Adventure in the Antarctic Kachi Kochi (のび太の南極カチコチ大冒険, Nobita no Nankyoku Kachi Kochi Dai Bōken) is the 37th installment of the Doraemon feature films.[1] It is directed and written by Atsushi Takahashi. The theme song for this movie is Boku no Kokoro wo Tsukutte yo by Ken Hirai. A video game based on the film for the Nintendo 3DS was released in Japan on March 2, 2017.

An Antarctic adventure awaits! Nobita and gang set out to locate the owner of a mystical ring frozen inside a massive iceberg for over 100,000 years.

Doraemon and his friends can't deal with the summer heat and head for Antarctica, where they build an amusement park using a secret gadget that makes ice crystals. Then they discover a mysterious ring in the ice. It turns out that the ring is buried in ice that is over 100,000 years old.

Unable to endure the midsummer heat, Doraemon transports Nobita and his friends to a huge iceberg floating in the South Pacific. While creating an amusement park with the secret tool “Ice-working Iron” the group finds a mysterious golden ring in the ice. Upon closer examination, they determine that the ring was buried in Antarctica 108,000 years ago… before people could have lived there!

Doraemon and friends head to Antarctica looking for the owner of the ring and come across the ruins of a huge city buried in the ice. Using Doraemon’s Time Belt, the group travels back 100,000 years ago and meets the young girl Carla and Professor Hyakkoi who are connected to the mysterious ring. But now the group must fight for survival as Doraemon faces the crisis of the entire Earth freezing! 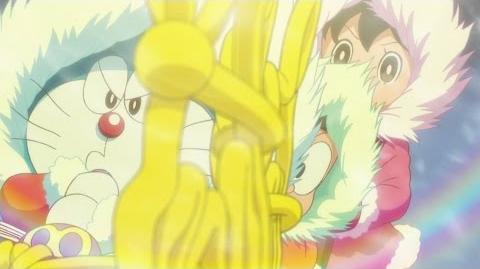 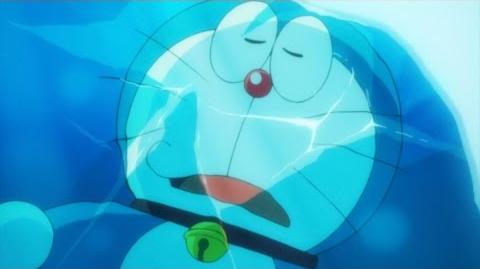 ［のび太の南極カチコチ大冒険］予告編２
2nd Trailer
Add a photo to this gallery

Retrieved from "https://doraemon.fandom.com/wiki/Doraemon:_Nobita%27s_Great_Adventure_in_the_Antarctic_Kachi_Kochi?oldid=126938"
Community content is available under CC-BY-SA unless otherwise noted.