Use your gadgets and help us!
This article is a stub. You can help Doraemon Wiki by expanding it.

Doraemon: Nobita's Treasure Island (ドラえもん のび太の宝島 Doraemon: Nobita no Takarajima) is the 38th installment of the Doraemon feature films. The franchise's 38th film was released in Japan in March 2018. This film is based on Robert Louis Stevenson's treasure island novel. Gen Hoshino - Doraemon is the ending theme song.

A sparkling expanse of ocean. Doraemon, Nobita, Shizuka, Gian and Suneo depart on an adventure to find the so-called Treasure Island in the Caribbean Sea.

In the story, Doraemon, Nobita, Shizuka, Gian, and Suneo set out on an adventure in the Caribbean Sea. Doraemon is the captain of a ship and fights his enemies on board. Shizuka gets 'kidnapped'(to be more precised, mistook as one of their members), and a storm impedes their journey. Mini-Dora help Nobita and friends on their journey. When the adventurers finally find the mysterious Treasure Island, they discover it is more than just an ordinary island.

Upon hearing about the story of Treasure Island, Nobita dreams of discovering and exploring his own treasure island, despite the fact all of the Earth has been mapped already. Doraemon provides Nobita a special treasure map that shows him the location of a treasure island. At the same time, the media announces the discovery of a completely unknown island. Believing the new island is the treasure island, Nobita recruits Doraemon and Shizuka to journey with him, with Doraemon providing a ship. Gian and Suneo also tag along. However, as they get near the island, they are suddenly attacked by a gang of pirates. At that moment, the island begins to move, revealing that it is in fact part of a massive, highly advanced ship. The pirates retreat, but abduct Shizuka in the process. Nobita and his friends are unable to rescue her, but save an unconscious boy named Flock.

Flock explains that the pirates that attacked them are in fact time travelers who travel to different eras to steal treasure off the sea floor, and he himself was part of the ship's crew but decided to desert since he couldn't accept taking orders from Captain Silver. Doraemon uses the treasure map to track the pirate ship's location. Meanwhile, on the pirate ship Shizuka encounters Sarah, Flock's sister. Sarah agrees to help Shizuka. Both Flock and Sarah reveal that Captain Silver is in fact their father, who went mad when their mother died and has become obsessed with gathering as much treasure as possible. Nobita and his friends attempt a rescue operation, but end up rescuing picking up Sarah instead of Shizuka, who is taken directly to Captain Silver.

Captain Silver then moves on the final stage of his plan. Having seen humanity's destruction in the future, he is determined to launch his pirate ship into space and colonize a new planet with all of the treasure he has acquired. However, this requires him to drain the Earth's energy to get the power he needs to reach space. Doraemon warns that taking Earth's energy will result in its destruction so Nobita, his friends, Flock, and Sarah attack the pirate ship again. Gian and Suneo stay behind to occupy the pirates while Nobita, Doraemon, Flock, and Sarah confront Captain Silver directly. While Nobita and Doraemon delay the activation of the pirate ship's engine, Flock is able to seize control of the ship and eject the energy the back into Earth. Captain Silver comes to realize how badly he had neglected his children, and abandons his plans, promising to be a better father to them.

Afterwards, Flock, Sarah, Captain Silver, and the rest of the crew return to their own time while Nobita and his friends return home, with Nobita gaining a new appreciation for his own father.

In the bonus video after the end roll (notice of the next work), which is customary in the second movie, the Earth of the Ptolemaic theory appears → The different theory club members badge appears → It is displayed as released in the spring of 2019 → Rabbit making rice cake on the moon has become an appearance. On October 11, 2018, it was announced that the title of the latest work was "Doraemon Nobita's Moon Exploration Report". 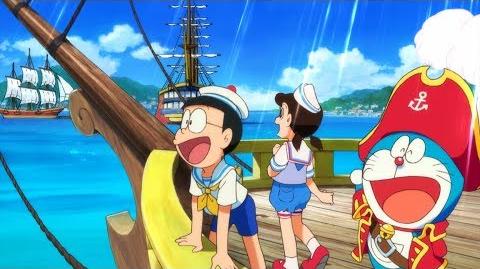 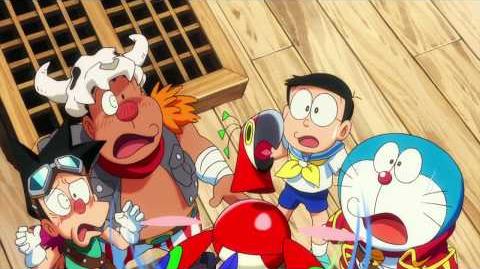