Locked
Doraemon (1973 anime), one of the articles sharing the title Doraemon, directs to this article which covers the Nippon TV anime series from 1973.
For other uses of Doraemon, see the disambiguation page.

The 1973 Doraemon anime series was a brief but successful attempt at adapting the original manga series into anime. It was initially aired on the Nippon TV network starting in April 1973, and lasted 6 months and ended with an episode named "Goodbye, Doraemon". After it ended, Doraemon remained exclusively as a manga until 1979 when Shin El Animation and TV Asahi produced and aired a more successfully second anime adaptation, which finished its run in March 2005. After the 1979 anime finished its run, a new version of the anime aired shortly after, which is still running to this day.

The series' episodes aired every Sunday from 7:00 PM to 7:30 PM, having two 11-minute segments in each broadcast. It had reruns from 1974 to 1979. The last rerun, in 1979, was ended abruptly after Shogakukan sent a letter to the TV station (Toyama TV) that was airing the series ordering them to stop airing the 1973 series since it would "damage the reputation of the new anime (1979 series)" or "confuse the children (referring to the difference between 1973 and 1979)". 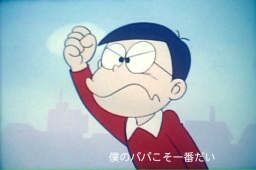 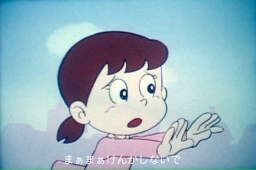 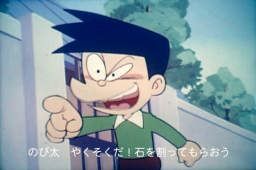 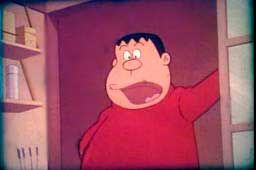 Contrary to popular belief, the series did have good ratings, although it was still considered unsuccessful. It was considered to be renewed for another year, but ultimately was not. It was mainly canceled due to financial issues with Nippon TV Video, as well as the president of the animation studio resigning. The new elected president of the animation studio did not have any interest in continuing the anime.

It is very difficult to find any footage of this version of Doraemon, aside from a few short clips and the opening and ending theme. Nippon TV Video sold off the film reels to attempt to cover their debt. It was also rumored that Nippon TV Video deliberately ordered a "cremation fire" and destroyed almost all of the episodes, cels and storyboard. Masami Jun, the production chief of the 1973 series, later confirmed that this was nothing more than a farce.

In 1995, episodes eighteen, and twenty through twenty-six were found to be stored in Studio Rush (now known as IMAGICA) completely intact but with only two episodes without audio. These episodes are commonly shown at Doraemon conventions, but can not be legally released on DVD, due to company (Nippon TV Video) being defunct in 1979 (This same happened to the another manga-anime series Cyborg Kuro-chan, which is have 53 episodes released on VHS but never released on DVD due to PIBI became defunct in early 2001, but all 66 episodes were released online.)

Date and Time of the original run and reruns

This series had a total of 12 major changes from the original manga.

Images whose corresponding episodes have not been identified