Locked
Doraemon (2005 anime), one of the articles sharing the title Doraemon, directs to this article which covers the TV Asahi anime series from 2005 to present.
For other uses of Doraemon, see the disambiguation page.

664 (ongoing)
The 2005 Doraemon anime was first aired on April 15th, 2005 (nearly 1 month after the 1979 anime ended) on the Japanese television channel, TV Asahi. Produced by by Shin-Ei Animation, it is the successor to the 1979 Doraemon anime. This is also the current anime version of Doraemon, running sucessfully in many countries. 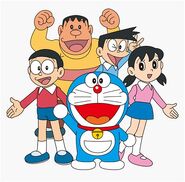 Differences between the 1979 version, manga and current anime