This article is a stub.
You can help Doraemon Wiki by expanding it.
Emily is a character in the Doraemon's English World learning videos. She is nine years old. She moved to Japan from the United States. She has one older sister named Mary. Emily would also appear in the Sega Pico game, Doraemon: Eigo de Asobou ABC (ドラえもん えいごであそぼう ＡＢＣ). It was only released in Japan.

A picture of Emily and her family. 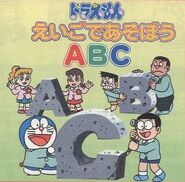 Emily asking for a white balloon in this mini-game.
Add a photo to this gallery
Retrieved from "https://doraemon.fandom.com/wiki/Emily?oldid=121373"
Community content is available under CC-BY-SA unless otherwise noted.