Principal Teraodai (寺尾台校長 teraodai-kōchō) is the principal of Robot Academy in the 22nd century. The inventor of the cat robots, and also the great grand child of Hiroshi Teraodai (寺尾台ヒロシ Teraodai Hiroshi), the principal of Public Tsukimidai Elementary School (which appears in the main series.) He trusts in The Doraemons despite many of their bad scores in school, and often assigned tasks to them.

The principal and Doraemon generally have a good relationship, though both can also be temperamental at times due to Doraemon and his friends' antics. He is the one who notices Doraemon's flaws compared to other cat robots of the same model and transferred Doraemon to the special class where Doraemon met his future friend. He also helped Doraemon overcame his insecurity of not having any specialty among the Doraemons by arranging him to have a soul searching trip at one of his brothers' beach house.

According to the principal himself, the Doraemons are the most troublesome students he had ever taught, and this is shown in The Doraemons Special: Robot School, resulting in the school itself being destroyed several times by their antics. Nevertheless, the principal trusts in all of them, knowing that they're capable of using their knowledge and ability for good.

It is stated that he had four identical younger siblings, each with their own profession. Two of them are shown in The Doraemons and The Doraemons Special: Robot School, one as an Undersea Aquarium's owner, the other as a seaside shack and surfer shop's owner. 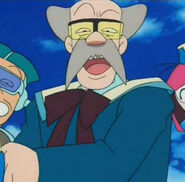 Principal and his mischievous attitude

In 2005 anime
Add a photo to this gallery

Retrieved from "https://doraemon.fandom.com/wiki/Principal_Teraodai?oldid=125053"
Community content is available under CC-BY-SA unless otherwise noted.