$196.4 million
Stand By Me Doraemon (Japanese: STAND BY ME ドラえもん) is a 2014 Japanese 3D computer animated anthology film based on the Doraemon manga series and directed by Takashi Yamazaki and Ryūichi Yagi. It was first released on August 8, 2014 in Japan. Bang Zoom! Entertainment premiered an English-dubbed version of the film at the Tokyo International Film Festival on October 24, and in Catalonia at the La festa dels súpers 2014 in October 25-26. Another English dub was shown in cinemas in the Philippines. Stand by Me Doraemon has been released in 59 countries overall.

The plot combines the short stories "All the Way From the Country of the Future", "Imprinting Egg", "Goodbye, Shizuka-chan", "Romance in Snowy Mountain", "Nobita's the night Before a Wedding" and "Goodbye, Doraemon..." into a new complete story - from the first time Doraemon came to Nobita's house to Doraemon bidding farewell to Nobita.

Spoiler alert!
This section contains details concerning the progression of the plot, namely its result. If you do not want it to be spoiled for you, skip this section!

Nobita Nobi is a fifth grader who constantly gets failing grades in his subjects due to his laziness and is always bullied by his classmates Suneo Honekawa and Takeshi "Gian" Goda. His great-great grandson from the 22nd century Sewashi, who watches him everyday, travels to Nobita's timeline while bringing alongDoraemon. Sewashi reveals that if Nobita keeps up his act, he will have a disastrous future: he will marry Gian's sister Jaiko, have his private company burned down, and will be left with a great debt. To circumvent this, he orders a reluctant Doraemon to help Nobita, modifying his nose to prevent him from returning to the future unless he is successful in his task, much to his chagrin.

Forced to remain in the past, Doraemon introduces his gadgets to help Nobita which helps him immensely. Though Doraemon warns Nobita not to be too dependent on his gadgets, he asks Doraemon to help him woo his crush, Shizuka Minamoto, whom Doraemon reveals as Nobita's future wife should the future be modified. However, all his efforts end up making Shizuka becoming closer to ace student, Hidetoshi Dekisugi. Nobita's attempt to be equal with Dekisugi by studying harder is futile and he decides to let go of Shizuka to make her happier, though his attempts inadvertently caused Shizuka to believe he might commit suicide. She arrives at the Nobi's residence and resists the disgust irradiated from a potion that poisoned by Nobita to help him, to which Doraemon reveals is the first step in Nobita and Shizuka's growing relationship to eventually becoming a couple.

Upon seeing his older self rejecting Shizuka's invitation to mountain climbing, Nobita disguise himself as his older self to help Shizuka, who was stuck in a heavy blizzard. His attempts were unsuccessful, but this makes Shizuka feel that she has to accompany Nobita, saying "yes" before collapsing from cold she contracted from her earlier conversation with him. Forcing himself to remember the moment, the two are rescued by the original Nobita from the future, who claims to have recalled the memory and came to them. Nobita learns from his older self that Shizuka was answering to the latter's proposition to marry her which means that the two will indeed marry. After hearing that Shizuka's father has also accepted her daughter's spouse, Nobita and Doraemon return back to the present timeline.

As Nobita's future has changed for the better, Doraemon's programming commands him to return back to the future in 48 hours. Noticing that Doraemon has a hard time to leave due to his concern for Nobita, Nobita confronts and has a brutal fight with Gian to prove that he is able to defend himself without Doraemon. Gian manages to severely beat Nobita, who refuses to give up, resulting in Gian retreating after getting tired of fighting. Doraemon, concerned that Nobita is missing, leaves the house and ends up finding him bruised. Doraemon tearfully takes Nobita home before leaving in peace the next day, though not before leaving a box resembling himself, referred to as a last-minute solution. During April Fools, Nobita is pranked by Suneo by believing a tsuchinoko was in one of the pipes but a dog comes out and attacks him and tricked by Gian into believing that Doraemon has returned. Enraged, he later opens the box and drinks the potion contained within. Now capable of materializing the opposing consequences of all his statements, he curses Sueno and Gian. The dog who has bitten him before viciously attacks Sueno, who flees in terror, while Gian is brutalized by his enraged mother, completing Nobita's retribution. He returns to his place, lamenting Doraemon's premature departure while ignoring Tamako, unaware that the potion is still in effect. The items in his room wobbles and, as he opens the door, he finds a happy Doraemon appearing from the drawer again, who claims that he regained permission to remain with Nobita, much to his own confusion. Noticing that Nobita drank his potion, Doraemon correctly concludes the eventual cause of his return. The two hug and cry in joy as the film ends, intermingled with a hilarious remix of insults due to the potion's effect being still active.

*- Not included in the card collection

Stand By Me Doraemon Original Soundtrack

Differences between the anime and manga

An English version of this movie was commissioned by TV Asahi and produced by Bang Zoom! Entertainment, the same company that made the English dub that aired on Disney XD US. It premiered at the Tokyo Film Festival in 2014. It resurfaced on the Japanese iTunes Store in 2015, it's also available on Amazon Prime Video Japan and on Netflix in Bangladesh, Nepal, Sri Lanka, India, Pakistan and the Maldives. It hasn't had a release in other countries.

As for the dub itself, it's completely uncut with no edits whatsoever. The only major dialogue difference is that Nobita's test in the "Goodbye Shizuka" segment is said to be a spelling test rather than a Japanese test. Despite this, all Japanese text has been kept intact.

The movie, alongside it's sequel, is set to finally debut on Netflix USA on December 24, 2021.

Names in other languages 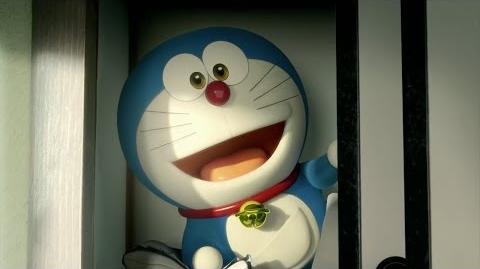 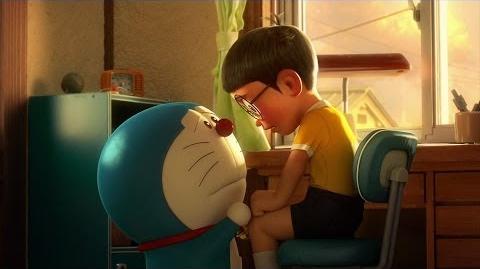 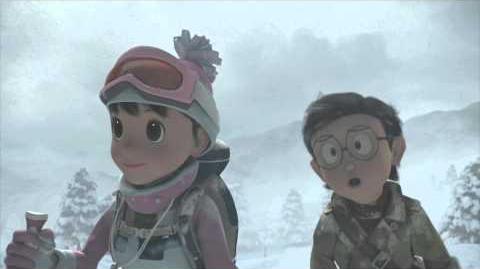 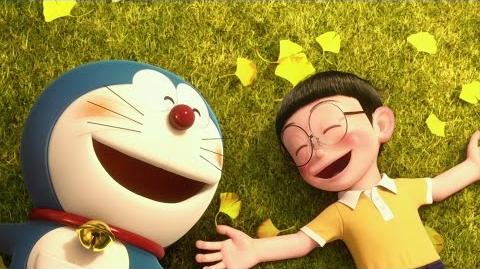 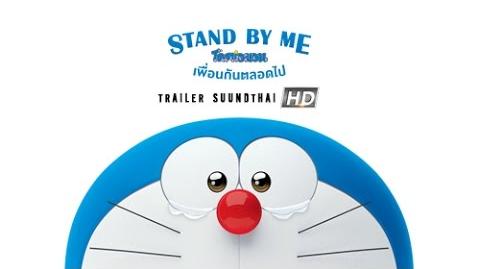 Main article: Stand by Me Doraemon/Gallery