All the Way From the Country of the Future
Time Machine is a gadget of 22nd Century which was created to do time travel.

The Time Machine consists of a computer operator and a panel consisting of few handles and switches. It has minimum one seat for the driver to sit. It also consists of an antennae like projection(s) which collects signals.

Doraemon's Time Machine is the most commonly seen and used time machine in the franchise. It consists of a nearly-square-shaped chassis, with various appliances mounting on it, such as controls, antennae, etc. The machine is magnetically powered. It originally has the capacity to hold up to three people at maximum. But since it had broken down once, Doraemon upgraded the gadget, and it is now able to transport up to five people. It is placed in the upper drawer of Nobita's desk in Nobita's room in Nobi's Residence. In the 1973 anime, Doraemon's Time Machine had two seats like car's interior and two levers. It was fully purple colored. The antennae didn't existed.

Dorami's Time Machine is more advanced as compared to Doraemon's. It is more spaceous and comfartable from inside. It is an orange (sometimes red) tulip-shaped machine with its leaf-like base. It has three antennae like projections at the top which seems to appear like the pistil of a flower. Dorami's time machine is placed in the mirror of her room.

The thief's Time Machine which appeared in A Visitor from the Country of the Future was black colored having a pair of yellow and red lights front and back.

Time Patrol's Time Machines resembles like a police car having black and white color with a small red tail like bulb which glows at the top. They are shaped like a computer mouse. The word "Police" is written on it's on both sides.

In Doraemon: Nobita's Dinosaur, Black Mask's Time Machine was flat and had his face on it. It had an antennae and a chair. His time hole was rectangular shaped. In Doraemon: Nobita's Dinosaur 2006, his Time Machine was highly advanced and was more comfortable with less controls. It was big and wide and was designed like a king's seat. His time hope was hexagonal. 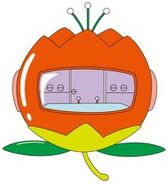 Retrieved from "https://doraemon.fandom.com/wiki/Time_Machine?oldid=137603"
Community content is available under CC-BY-SA unless otherwise noted.