Uset must set it in order to start the timer. Then, it can be attached to the person the user wants to mortify. When the timer runs out of time, it explodes and the person does some funny dances and repeatedly mumbling "Baka" (stupid in Japanese) for a brief time. This bomb also effects the peoples who grab the bomb which stick on another one's back or some robots after the explosion.

For example, Nobita put the Timed Stupidity Bomb onto behind Gian. When he sings the song at Suneo, the bomb actually explodes. After the effect of the gadget, Gian finishes Suneo for being his song as an funny song.

The amount of time the victim's senses take to come back seems to be random, but never more than five minutes.

Names in other languages 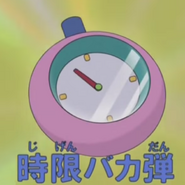 Add a photo to this gallery
Retrieved from "https://doraemon.fandom.com/wiki/Timed_Stupidity_Bomb?oldid=125897"
Community content is available under CC-BY-SA unless otherwise noted.