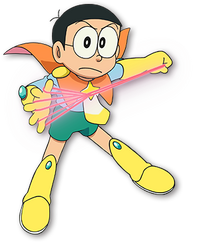 Meeting Mustafizur Rahman and playing alongside him

Also too many to count, some fictional, some real

Konnichiwa (こんにちわ) whoever is reading my userpage. I am SuneoDash, also known as Suneo and I am a huge Doraemon fan. So I mostly edit on this wiki but I edit on some others as well but this one 90% of the time like I said I am a huge Doraemon fan. My favorite character is Suneo.I love all the main characters but Suneo is my favorite. I also love animals a lot, and long for a pet puppy.

A lot more but I don't feel like writing anymore

I hate these people, so I'm not going to link to them

Retrieved from "https://doraemon.fandom.com/wiki/User:SuneoDash?oldid=137928"
Community content is available under CC-BY-SA unless otherwise noted.

Ranked #5
on this wiki