Use your gadgets and help us!

Zanda Cross (ザンダクロス), real name Judo (ジュド), is the robot built by Nobita whose real owner is Riruru. When he found a bowling ball at North Pole, the lights of the ball started blinking and many parts of the Zanda Cross fell down. With the help of Doraemon, Nobita built the robot and controlled it with a gadget of Doraemon. When Nobita got to know its was Lilulu's robot, he gave it to her. Later, they found out that that the bowling ball (Nobita named it Pippo when it's ball hatched with Doraemon's gadget) was the brain of Zanda Cross. Zanda Cross had helped to fight with the steel troops.

The name Zanda Cross is a pun on both "Santa Claus" and "Thunder Cross". 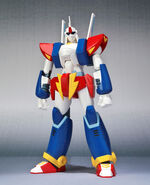 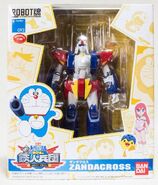 Retrieved from "https://doraemon.fandom.com/wiki/Zanda_Cross?oldid=132990"
Community content is available under CC-BY-SA unless otherwise noted.